If what we do today is history tomorrow, we can influence our future history 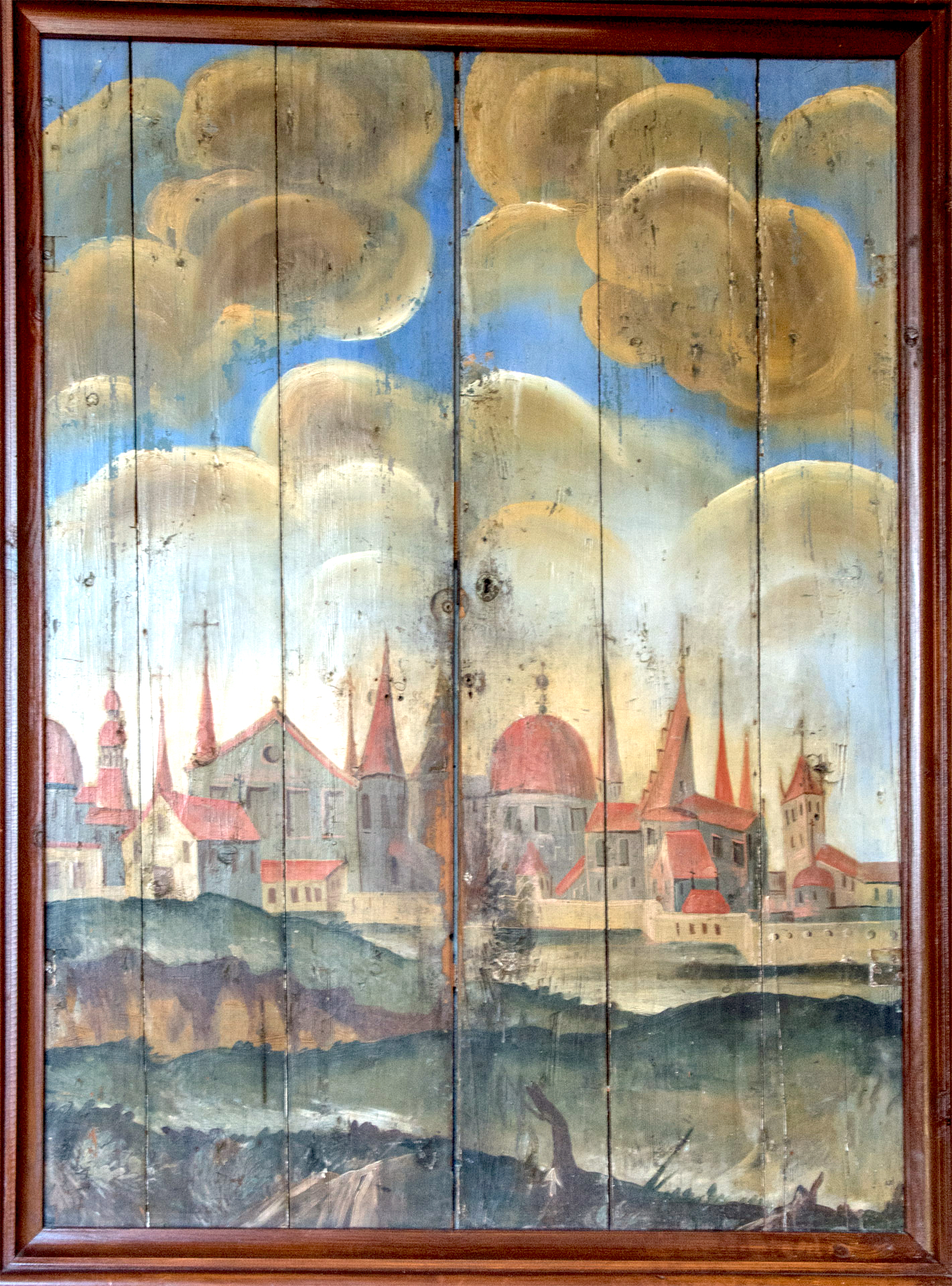 You are walking history
Taking the pilgrimage route Göta River is about walking the history. The rich ancient and medieval history is constantly present in the Göta river valley. Whilst developing the trail, we work actively to make our rich historical heritage fair. It’s a responsibility that we take seriously and with humility.

Pilgrimage past and present
Pilgrimage was found in the Middle Ages in Europe and the Nordic countries. The major pilgrimage destinations were Jerusalem and the Church of the Holy Sepulcher, the tomb of the apostle Peter in Rome, as well as the tomb of the apostle Jacob in Santiago de Compostela. In the North, Vadstena and Olof the Holy Sepulcher in Nidaros (Trondheim) were the most important targets.

We can see the same phenomenon in modern times. We travel and if you choose to broaden the concept: we certainly do pilgrimages. The purpose certainly varies and the purposes of our trips have become more. In our time, the hike for some can be about existential issues, while for others it’s all about religious motives or personal development, exercise or entertainment, nature experiences or getting to know new places and history. No matter what, the walk plays an important function. In the past, or now.

In the same way, pilgrimage paths develop communities and landscapes they cross today. In addition to giving visitors and residents better access to experiences, nature and cultural heritage, development takes place in a number of areas. As before, the pilgrim trail opens doors to new businesses and provides opportunities for different nationalities to meet. Important sooner as well as now. That will be important in the future.

The European Community
With the pilgrimage movement, the Nordic countries became part of the European Community. Millions and millions of people were constantly on the move and it’s estimated that between 20 and 50 percent of Europe’s adult population participated in pilgrimage between the years 1150-1450. In the 1540s, King Gustav Vasa banned pilgrimage in Sweden.

In today’s society, the number of people walking is increasing. More people understand the value of hiking. The latest research points to the effects of hiking, what nature does to us and the importance of recovery. Maybe the pilgrimage is more important today than ever?

At the same time, technological advances have facilitated our travels. We can travel everywhere and there are reasons for reflections. This means that there are higher demands on us regarding sustainable travel and tourism. The pilgrimage is something we share toghether, and it’s done respectfully. For a long time, the Göta River Valley’s itineraries have been the very foundation of people’s mobility and communication.

Göta Älvdalen – important and unique at all times
As you wander through Göta Älvdalen you’ll face a beautiful countryside that has been inhabited for over 7000 years. The river has always been an important route where trade, people and power have flowed through the years.

Today there is a unique cultural heritage to visit and discover, and history has left traces along the trail. Bronze and Iron Age. Viking Age and Middle Ages. Industrial history.

You are invited to old itineraries and judging rings, old tomb fields and rock carvings, glassworks and rope store museums, royal estate and gallows hill, myths about Queen Kristina and even more stories about the battle between Norway, Denmark and Sweden. And much more than these stories. To make this available, we work with different types of information and also arrange hikes that you will find under “Hiking together”.

Node Lödöse – hiking in all directions
Lödöse is the pilgrimage’s historic hub. Archaeologists have found over half a million finds in Lödösejorden. The city is also Gothenburg’s forerunner.

During the Middle Ages, Lödöse was one of Sweden’s largest cities, in addition to being the only Swedish port to the west and a significant market town. We are therefore talking about the original Swedish west coast.

Lilla Edet’s current municipal coat of arms links to Lödösehus. The Lödösevapnet is one of Sweden’s oldest municipal weapons dating back to the 13th century. Lödösehus was the residence of the medieval Duke Erik Magnusson. He had Lödöse as the center of his Swedish-Danish-Norwegian county.

To Lödöse, Hansan’s cargo ships came up by the river, and it was here that travelers searched for arrival and departure from the continent. It seemed natural that Lödöse became a hub for many pilgrims. There is convincing evidence at Lödöse Museum. Lödöse is one of Sweden’s largest finds of pilgrimage brands.

Pilgrims passed Lödöse on their way to and from Santiago de Compostela and other places in Europe, Nidaros (Trondheim), Skara and Vadstena. From Lödöse, they migrated to Nidaros via Edsleskog in Dalsland.

When you hike the Göta River pilgrimage route through Lödöse, there are trails in almost every stretch of the weather. From here, you walk north, south and east. On the other side of the river (in the west), there is a pilgrimage to the source of St. Olav. North of Lödöse at Hjärtum, there are wires in a westerly direction. In a way, Lödöse seeks its origin source. The Göta River Pilgrim Trail helps the city find it. So do you.

Portus Scarensis
Pope Nicholas III in Lödöse mentioned in a letter 1279 as portus Scarensis, the port of Skarastiftet. The Peter voltage collected by the churches in Sweden was sent to Rome via Lödöse. In 1473, international trade was moved from Lödöse to New Lödöse, a precursor to Gothenburg.

2018-
We are approaching the present. Given contemporary requirements for sustainable joint development, the Pilgrim Trail Göta River is secured in the long term. The trail is quality assured and branded, service is involved and the concept is refined and developed to make the Göta River Valley’s rich cultural heritage fair.

In order to give hikers the best conceivable conditions, ongoing work is done through collaboration between Ale municipality as a project owner together with committed parties from the Swedish Church and the pilgrimage center Gothenburg, the city of Gothenburg, the districts of Gamlestaden, Östra Göteborg and Angered, Lilla Edet municipality, Trollhättan City, Vänersborg and many more, including Visit Trollhättan Vänersborg.

In close co-operation with Västarvet in its role as regional co-ordinator, and financed through Leader, the project Pilgrim Trail Göta River under the guidance of project manager Johan Norling. 2021, when Lödöse celebrating 1000 years and Gothenburg 400 years, the pilgrimage route Göta River is re-inaugurate.

You are walking history.

Sure, you can hike wherever you want. You will find your experiences and own breathing holes and oases. When you choose the Göta River pilgrimage, you will walk in stages, as a pilgrimage trail in its full distance or as part of your long journey towards or from Nidaros (Trondheim). Just like the past.

No matter how you walk on the pilgrimage route of the Göta River, you walk history. You take your steps through the beautiful Göta river valley. You do it for the wings of history, for nature and people.

It’s your choice how you will take on the pilgrimage route.

The buckles of tin and textile utensils were nice to express their love in the Middle Ages. Lödöse museum has the objects where the writing echoes through the centuries that the emotions were the same, past as now.

The end knife from the late 1000s was a textile tool used to keep the threads apart on the grounds of a band loom.

On this trifle it says in run inscription, “Think of me, I think of you, you love me, I love you”. On the back it says: “May she have mercy on me”.

The trimming knife can be seen as a love letter of that time. And were they bothered before, why not do it now? Therefore, try to write a letter during your hike. Write by hand on a postcard or letter to someone who means something. Post it. Have a family member, friend or partner hear from you. On the Göta river pilgrimage you will find time for hiking and reflection. But above all, consideration. We want to take that into the future. Send a letter.

Quick course in pilgrimage
Pilgrimage has a long history. It is said that Emperor Constantine’s mother Helena already made one of the first pilgrimages to the Holy Land as early as 324 AD.

In the transition period between antiquity and the Middle Ages we also find the oldest pilgrimage accounts. From this time on, one of the most famous documents (alongside the Jerusalem itinerary) is the so-called “Jerusalem Embroidery”. Interestingly, this is a form of guidebook, probably written in the 500s. Here you can make your way around Jerusalem. Like today’s guidebooks, this type of guidebook conveyed what one should see and experience during one’s visit. Past meets the present and vice versa.

And although the tooth of time has brought about changes in the phenomenon of pilgrimage, there is a common denominator: in people’s search. Often it tends to be about the search for the mysterious and inexplicable- or in the search for oneself. The one does not exclude the other.

During the 1100s, pilgrimages received a renaissance. With a little humoristic touch- is that you can liken the trips to an early form of “charter trips”. The similarity is found in the fact that one would prefer to travel in groups and during what we today call “organized forms”.

As a result of the pilgrimage’s development, taverns and overnight places were gradually built up along the routes. Not unlike what we can see today along the Göta River pilgrimage.

Often, a form of trade also emerged that is largely reminiscent of today’s tourism industry. Monks acted as guides and many times there were souvenirs to buy which often consisted of relics of various kinds. In other words, you are walking past, present and probably future on the Göta River pilgrimage.

In the 1300s, Europe was hit by misgrowth and the death of poets (the black death). This was also a century when a third of Europe’s population was on pilgrimage. Here was the connection between the great need and the search for help from the saints in the holy places.

Could it be that a similar relationship exists in our time? To some extent, the pilgrimage may have been developed because of people’s need for inner calm and tranquility.

In the 1990s, the pilgrimage began to become a popular movement across Europe. More and more people walked the French road to Santiago de Compostela. The interest then spread across. In Sweden, pilgrimage centers were opened in Vadstena and more pilgrimage paths were brought back to life.

The keywords in the present day pilgrimage concern the desirable condition. As the demands and stress increase around us, they are especially conceivable. They are seven in number:

In light of this, your pilgrimage can get an extra layer, if you wish. Pilgrimage can be a way of making an inner journey in the outer journey. Through the walk you seek yourself and the good values of life. Good luck!